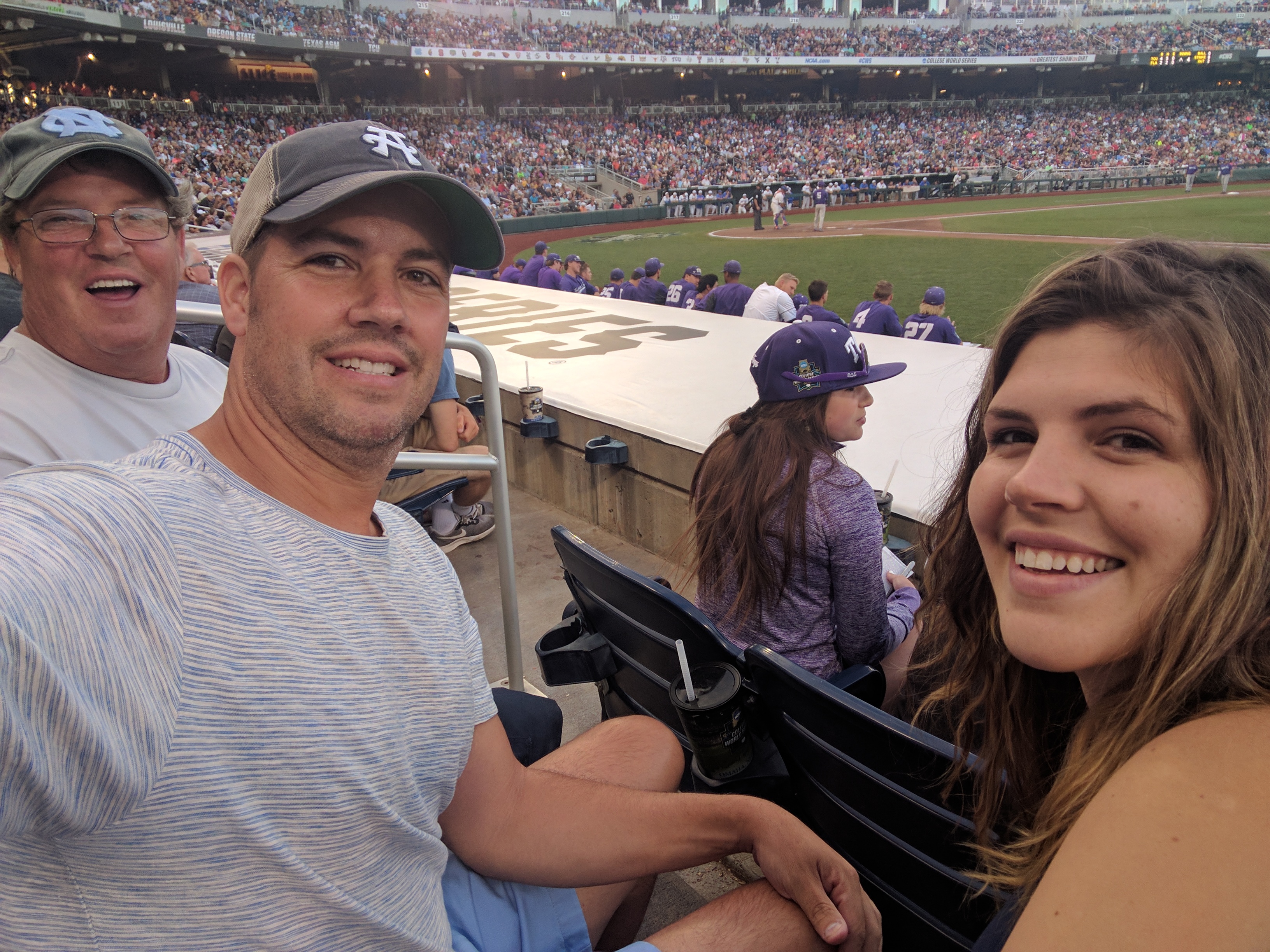 Late Monday afternoon, I returned from an amazing 2,200 mile road trip with my dad and my sister to The College World Series, “The Greatest Show on Dirt,” in Omaha, Nebraska.  The trip was not only a bucket list “check” for me, but most importantly for my dad, Andy.  Dad, or “deddy” as I called him when I was little, coached and cheered me and Sally through years of baseball and softball.  Long drives in his 1981 Datsun truck, after getting off early from work, to make sure we got to our all-star games or travel ball tournaments on time, always having time to make a stop for a Gatorade, sunflower seeds and Big League Chew.  This trip was for Dad, who I called after my first semester at Wofford when I realized I probably didn’t study or take my education seriously enough, putting even my baseball scholarship at risk due to that first semester GPA, “Dad, what are we going to do?”  His response, “Son, it’s not what we’re going to do, it’s what are you going to do?”  This trip was for him, our Dad, but became a trip for all three of us!

The journey started when Sally called me last November and said, “Hey brother, what do you think about me and you taking dad out to the College World Series next year and we can give it to him for Christmas?”  Sally still calls me “brother” to this day; I guess it goes back to me being 12 when she was born and I was always brother when she learned to talk….kind of like “daddy” or “mommy”, I was “brother.”  Okay, I digressed a little, but for a lot of you that know me, I’m not always the most spontaneous person that just says “hey, let’s drive 1,100 miles and go watch the College World Series.”  I have to think about those things…but I said, “uh, yes, of course,” fairly quickly when Sally asked me.  In the back of my head, though, I was thinking, “what about the kids, time off at work, how much is this gonna cost……?” Within a few weeks, Sally had a 3 bedroom house rented through Airbnb….we were booked and we were going to the College World Series in June 2017!

We set out on our road trip last week when Sally and Dad got to my place around 10:00 Wednesday night.  The plan was for us to sleep for a few hours and get up and go super early.  Sally said, “He Bro, why don’t we just leave now and drive through the night?”  We left at 11:00 PM on Wednesday on our 17 hour drive to Omaha, Nebraska….while it wasn’t as I had planned, driving all night made more sense once we got on our way and especially once the sun came up; Sally got a full night sleep through the night, finally waking at our breakfast stop at Cracker Barrel in Mt. Vernon, Illinois!  Getting there at 4 o’clock in the afternoon versus 8 o’clock was nice.  We capped off the evening with three great Omaha steaks, a salad and a beer; at 8:30 all three of us were conked out on the couch, of course, watching that night’s game on TV.

Friday and Saturday were all about being at the park watching baseball and experiencing the College World Series in person.  As a baseball player for almost half of my life, into my early 20s, there was hardly a year that I didn’t watch the series on TV and dream of playing there one day.  Here I was, early Friday afternoon, with my Dad, sister and the largest smile on my face walking into TD Ameritrade Park to watch the final four teams play at the College World Series.  While I never got to play there, my dream came true because I was there in person to see, smell and hear what the Greatest Show on Dirt is all about!

It was a long, whirlwind of a trip, but one that I am glad we did and one that I want to do again with my children one day.

Memories of this trip will be with me for the rest of my life.  Yes, we were at the College World Series and yes, we checked off a bucket list item that many sports lovers have, but this trip was more than the bucket list check of going to the “Greatest Show on Dirt.”  This trip was about giving back to our dad; his two children putting him first for a change, giving him the opportunity to check off one of his bucket list items, to thank him for the many sacrifices he made for us.  The trip was about Sally and I spending quality time together with our dad, experiencing new things, watching baseball, drinking beer, laughing, singing; just being us, a son, a daughter, a brother, a sister and our dad, together; something we’d never done before!

I don’t know where this blog is going to take me, but I am glad you stopped by and I hope you’ll continue to join me on this road trip.